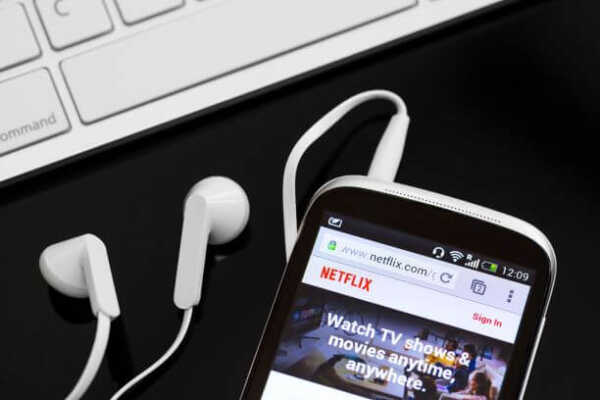 If nothing in this title strikes you as strange, then we are in more trouble than I thought!

Late last year I came across an article describing how Netflix had quietly started testing a variable playback feature which would allow viewers to watch content at faster speeds.

Perfect! And while we’re at it, Spotify, you should have an option to remove the chorus from all songs. Why waste all that time listening to a repeat of the same thing? We could get through so many more songs that way.

Alright, perhaps I was being a little dramatic. Besides, no one would want to watch Stranger Things in fast forward, it would ruin the show!

I tried to let it go and hadn’t really thought of it again until a few weeks ago on a flight home when the gentleman sitting beside me had his tablet mounted up on the seat in front of him. I noticed that he was watching a movie in what looked like fast forward. Since he had his headphones on and was intermittently laughing, it occurred to me that he was using the Netflix feature.

Oh no, it is being used!

To be clear, I am not upset with Netflix for testing this option. It can’t be ignored that one of the things that have made Netflix so successful is their commitment to both anticipate and respond to their subscriber’s desires.

From a purely strategic perspective, Netflix is a business and thus in competition with others. They disrupted an entire industry by listening to the customer. Can I blame any organization for staying curious and keeping their finger on the pulse of future trends? Of course not!

At the end of the day, this isn’t even about Netflix. Its more about how this user feature, when enabled to race through content, represents our collective obsession with the notion of more, faster, newer, sooner.

Netflix offering a feature that potentially exacerbates that is what concerns me.

As a researcher of human behavior, these are my top three reasons why I would like Netflix to say no to the variable speed option following the testing period, even if users give it the green light.

To start, I like 158 million other worldwide Netflix subscribers, LOVE a good binge of a new series or movie.

There is nothing wrong with watching Netflix within reasonable limits. There is a case to be made that immersing ourselves in a few episodes of our favorite new series offers a brief reprieve from the stressors of life. There are also some amazing documentaries that inspire powerful conversations, challenge our beliefs, and fill us with pure pleasure. No one would argue that Netflix can be both relaxing and enjoyable.

Though intermittently entertaining, there is a neurological tipping point where too much, too often and for too long pushes enjoyment into addiction.  My primary concern is that the addition of variable speed watching, which promotes watching more, may lower that tipping point.

Whether we watch Netflix because we love being able to escape life or because we simply love the show, our brain responds by producing pleasure-induced dopamine. At 11:30 pm when our eyes are stinging because we are so tired, but we feel this need to watch just one more episode that is us becoming situationally addicted to the shot of dopamine we get by starting the next episode.

This decision isn’t driven by logic, it is driven by emotional pleasure because our brain doesn’t distinguish the source of pleasure.

Providing the option to watch shows and movies more rapidly does not increase enjoyment, it exploits our brain’s addictive tendency for more, faster, newer, sooner.

Research suggests that the more addicted we become to the dopamine fix, the less enjoyable it becomes.  Logically, you would think that if something is less desirable then we’d stop. Instead, we are motivated to consume more in attempts to feel better.

This may help explain why people make the seemingly irrationally decision to trade-in a social hangout with friends for a solo binge-watch of the latest release.

Multiple studies have highlighted that those most susceptible to a technology addiction are teens and people already experiencing feelings of isolation from their peers. This is the real reason for concern. Technology addiction has been linked to higher levels of stress, anxiety, and depression which could mean that the most vulnerable groups are also the ones most likely to use this feature.

Point #1: There is no need to add a feature that could negatively impact the digital well-being of Netflix’s platform users.

From this point you may be thinking “Listen, lady, mind your own business.”  Fair enough. My intention is not to tell people what they should enjoy and how to watch Netflix. It is to challenge people to consider the consequences of their actions and decisions.

One of the primary motivators behind this express-watch feature is because Netflix reported users being bored with shows that felt too long. In other words, our attention spans, which are defined as the length of time a person is able to concentrate or remain interested in a task or an activity, are shrinking, even for entertainment. A study from Microsoft found that our attention span has decreased to eight seconds – equal to that of a goldfish!

Much of this diminishing ability to focus has been attributed to the overstimulating world we live in today. Consider the volume of information available at our finger times, the buzzing, dinging and blinking of constant notifications, and the endless scroll holes social media offers. It’s not a big leap to believe that how our brains process information is changing, and not for the better.

This is my second reason why I don’t believe Netflix should offer the option as it could add to the ever-expanding attention deficit being experienced today.

Some may wonder if it really matters how distractible we are – it does! Shrinking attention spans negatively impact our ability to achieve goals, process new information and learn new skills. It makes it difficult to stay present and connected with the people around us. It makes it harder to slow down our overactive brain, negatively impacting the quality and quantity of sleep we get each night.  Each is needed to promote positive mental, emotional and physical health.

Point #2:  With attention being reported of one of our scarcest resources, I don’t believe Netflix needs to offer a feature that could further diminish it.

Perhaps the argument can be made that by providing an option that would allow people to watch a movie in less time would motivate people, who would otherwise skip a leisure activity altogether, to add it to their schedule.

Though it may seem counter-intuitive, this is the basis of my third concern.

In my own research, I have seen again and again that our pervasive emphasis on productivity and efficiency is distorting our perception of relaxation and self-care. Instead of viewing it as something to enjoy, we approach it as just another task that should be condensed down and checked-off our to-do list. I leisured today, next!

It sometimes feels like we’ve transformed life into a hot dog eating contest. How much can we get through in a designated amount of time?

Even before Arianna Huffington started THRIVE Global, back in 2013 a new and novel column was launched in the Huffington Post named “Less Stress, More Living.”  Still, things seem to be getting harder with perceived stress levels raising annually.

I worry that we are rationalizing unhelpful and unhealthy choices in self-deceiving ways. For example in one conversation with a friend they pushed back on my concerns arguing that decreasing the time we spend watching each episode of the latest series sensation could provide more time for people to spend with their kids, to exercise, to talk to their partners, to enjoy nature and to do more meaningful things.

I don’t buy it. If you only have 30 mins, watch 30 min of a show – BUT ENJOY IT!  Be present, let your senses be titillated, integrate yourself into the story, love or hate the characters, allow the music to create an emotion that is coded into your brain.  And yes, I realize that I am giving far too much cinematography credit to many shows on Netflix, but perhaps we need to fully enjoy fewer things instead of just rushing through lots of things.

Besides, what are we rushing towards? I think most people would agree, we are often missing the moment just to add more busyness and more things to our already overwhelming schedules.

Point #3:  We need to practice slowing down, not pressuring ourselves to speed up and be more efficient at watching Netflix.

A final reality check-in: who doesn’t eat more candy when there are leftovers from Halloween? We all know that when our phone buzzes it’s hard not to check. Give me a super-sized fry from McDonald’s and I’ll eat them all.  I’m not saying that humans aren’t responsible for themselves – we are.  But given the choice Netflix, please resist adding to our very human and often negative, tendencies. Instead, keep adding amazing content – that is all you need to keep us coming back!