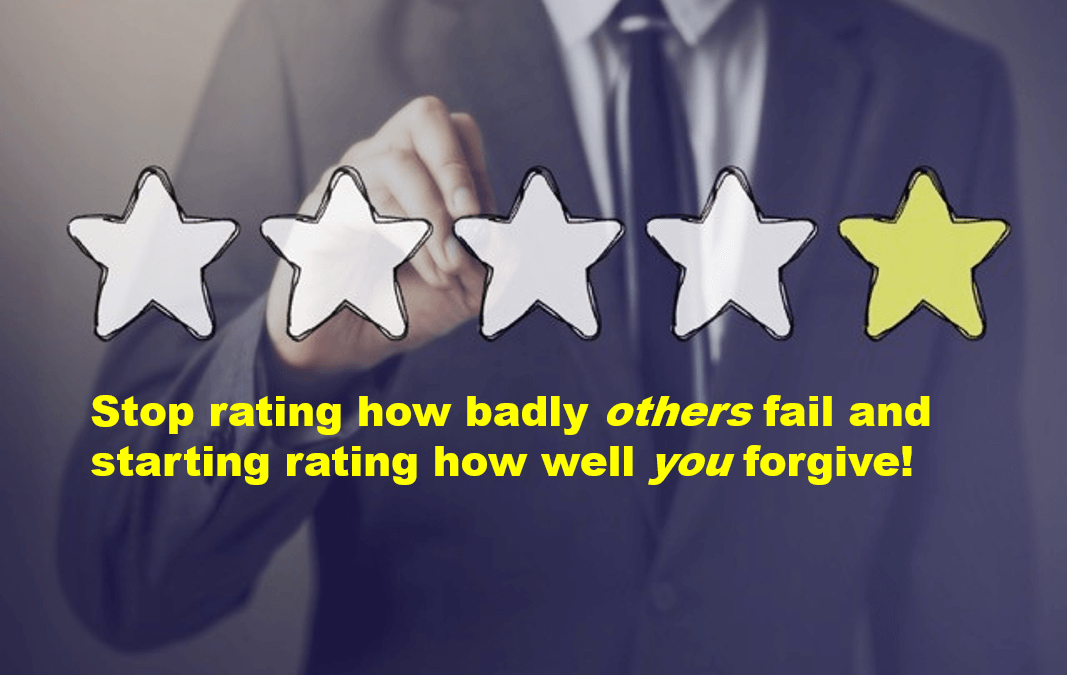 Does Your Company Need to Replace #Fail with #Forgive?

I recently spoke at a conference where the theme was “Learning to Fail in the Spirit of Innovation.” In preparation for my talk, the senior team shared that they aspired to create a high-trust, highly collaborative environment to enable people to take risks without being afraid to fail. Unfortunately, that was not currently the case. As a leadership strategist, I have found that there is a strong connection between failure and forgiveness.

Weeks later with approximately 500 people in the room, I tested the potential of this connection. I asked the audience to please stand up if, in the spirit of innovation, anyone had ever felt wronged by a colleague at work. Examples could have included someone had taking credit for their work, inappropriately blaming them for a mistake, circumventing them in the decision-making process, questioning their integrity, or wrongly accusing them of acting with self-serving intentions and motivations.

As you may have guessed, everyone in the audience was standing. I then asked how many of them had fully addressed, let go and forgiven their colleagues for these wrong doings? There were squeamish, quiet laughs in the audience.

Making mistakes and conflict among colleagues are both inevitable and required in the process of innovation. However, what is spoken of less often is how we respond to each. Withholding forgiveness has a far-reaching ripple effect, starting with those involved and out to the organization as a whole. Complicating matters, most colleagues depend on one another so holding a grudge and commiserating while letting frustrations fester only serves to drain energy, increase negativity and draw out a difficult situation. Ultimately, the quality and quantity of innovative results are lost because no one is willing to risk failure in that environment; the cost is far too high.

Many organizations are quick to talk about the concept of failure yet miss that the impact of failure on humans is an emotional one. Acknowledging that is the first step. The second step is practicing it. Below are some strategic and productive practices to support forgiveness, repair relationships, restore trust, helping people feel safe enough to take risks and learn from their failings.

There is a saying: “Holding onto resentment is like drinking poison and waiting for the other person to die.” The research on resentment is clear. Not only does it consume valuable time and productivity, but it also taxes your emotional and mental health. For example, there are strong connections to cardiovascular implications, such as increased blood pressure. Other studies have shown that the increased stress of perceived injustice can compromise your immune system, sleep and pain tolerance. While the other person may have wronged you, the only damage is to yourself by holding onto the bitterness.

Alternatively, you can choose to forgive. This doesn’t mean you condone or accept the actions of the other person. Instead, you make a conscious choice that after you have addressed it with that person, independent of the outcome of that conversation, whether they apologize or not, changed or not, you make a choice to hold onto forgiveness instead of being pulled into the negative hold of resentment. If you are looking to positively participate in a “fail and learn” culture and contribute to a happier and healthier workplace, this is an essential skill. The first person that forgiveness impacts is the forgiver, so hold onto that freedom.

2.   Practice Holding the Person Accountable versus Holding the Transgressions Against Them.

Forgiveness and accountability are not dependent on one another, however, when paired are a very powerful couple. Outside of your home life, you spend the greatest amount of time at work. Your coworkers are going to make mistakes, feelings will be hurt, and both sides will feel misunderstood at times. To manage this, don’t lower your expectations, instead clarify them to establish accountability.

You can set behavioral parameters and agreements on how things will be handled next time if a similar situation arises. Increase touchpoint meetings to monitor accountability and be open to adjusting to changing requirements. Innovation means new, and anytime people are doing something new they are bound to do it imperfectly. Holding someone accountable catalyzes learning, forgiving failure enables innovation.

3.   Practice Focusing on the Future versus Staying Stuck in the Past.

Forgiveness is a complicated concept, often misunderstood and more often said, but not genuinely given. It’s not uncommon for someone to say they forgive, but then hold an internal grudge over someone’s head for weeks, months or even years at a time. As a result, emotional residue builds, and distrust keeps them in the past. Forgiveness is not the same as trusting someone. Forgiveness is free while trust must be earned. You can’t move the needle on trust when withholding forgiveness keeps you stuck in the past.

This article was originally published on Thrive Global on April 17, 2018: https://www.thriveglobal.com/stories/27619-does-your-company-need-to-replace-fail-with-forgive