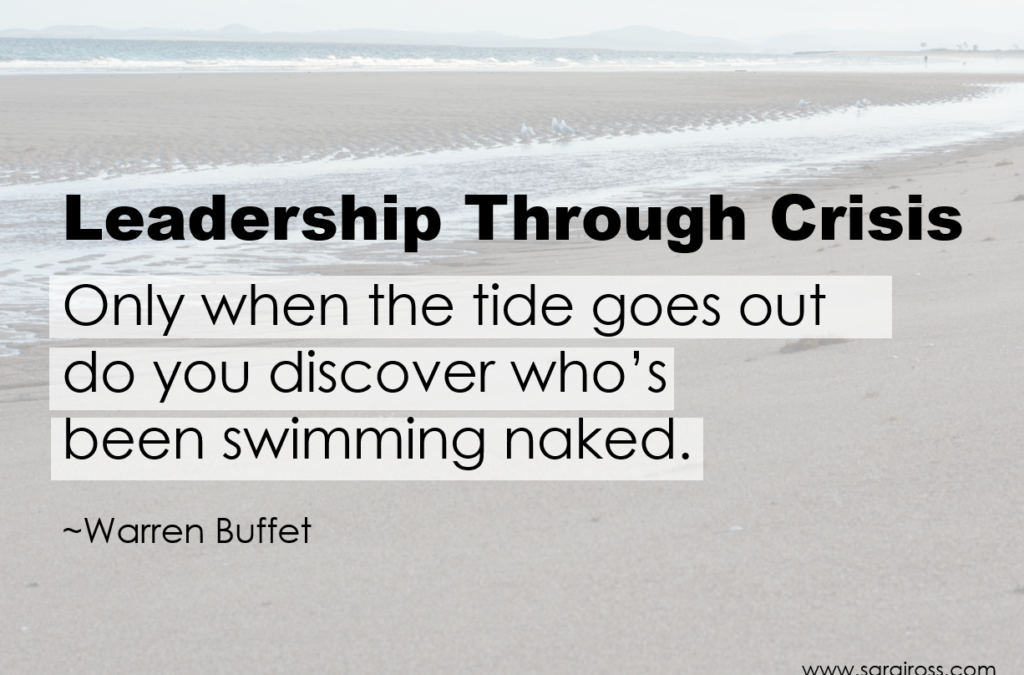 As someone who studies, writes, coaches and speaks about how to develop exceptional leaders, I have seen how a crisis can distinguish the best leaders from the rest.

Never are strong leaders needed more than amid crisis. This is also when it is hardest to be an exceptional leader.

In crisis is where the ‘rubber hits the road’ when it comes to leadership. This is when a leaders proclaimed values are tested. It is much easier to be a good leader when everything is going well. But that’s not when we need leadership. Leadership is tested in the tough times – when the tide goes out.

Only when the tide goes out do you discover who’s been swimming naked. ~Warren Buffet

Earlier this week, I had a coaching client who was distraught about a decision that needed to be made about letting people go.

I have heard some of the most beautiful and compassionate stories of how companies have executed this hard decision. Unfortunately, I have also heard other examples that I’ve had a hard time understanding.

Today, I would like to say thank you to all of the leaders who’ve lost sleep trying to figure out how to save businesses and jobs;

Who are sacrificing just as much as they are asking their people to sacrifice;

Who showed up and engaged human to human, even though most were forced to communicate these difficult messages through screens;

Who made sure their people understood the contribution they had made to the company’s success;

Who pushed for their people to be able to say goodbye to colleagues and clients because the decision was due to circumstance not performance;

Ultimately, those who put people over process and did it with care, kindness, and compassion.

In crisis, the majority will over-focus on what needs to be done and under-focus on how they will do it.

It is these leaders, who focus on how to demonstrate their values, who take ownership of their impact, who will make the hard decisions but communicate them in a way where people feel seen, heard and valued; these are the leaders whose positive legacy will stay with us long after the crisis is behind us.

Following our call, my client realized he had been fighting the wrong battle – the decision that had to be made.

Accepting it was leadership of the business.

But his leadership was on full display when he started fighting for how he was going to communicate it – that is the leadership of people…even after the tide goes out!